If you had told me a few years ago that I would be writing a blog for the ABR regarding my upcoming AAPM presentation on “The Intersection of Race and LGBTQIA+,” I would not have known how to respond. As a proud Puerto Rican, culturally Jewish person who identifies as an androgynous/gender-nonconforming lesbian, I am deeply humbled to have been given the opportunity to discuss the topic on this platform.

Before the Supreme Court decision on June 15, 2020, I could have been fired for my gender identity or sexual orientation, if it were not explicitly protected by my employer or written in the local or state law where I was employed. The 2020 ruling states that the 1964 Civil Rights Act protects gay, lesbian, and transgender employees from discrimination based on sex. Many people think about the Civil Rights Act as primarily protecting Black Americans without recognizing the power this landmark decision has had for other marginalized populations. Throughout our history, the fight for liberation has often been spearheaded by the most marginalized. For LGBTQIA+ Americans, we had Marsha P. Johnson, a Black trans woman credited with leading the Stonewall Uprising in 1969. A year later, we had the first Gay Pride Parade in New York City. 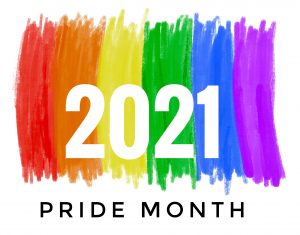 My grandmother came to New York City from Puerto Rico when she was 8 years old. She lived in the Bronx and experienced discrimination based on the color of her skin. Since I was young, she has advocated on behalf of all people and more important, has continued to learn and develop her understanding of what it means to be human in our evolving society. At 79 (she can’t know I shared her age!), she’s willing to engage in discussions regarding the differences in gender identity and sexual orientation as well as wanting to read my current booklist which includes How To Be An Antiracist by Ibram X. Kendi. I carry her hardships and experiences, and my passion to do everything in my power to ensure that this society becomes a more equitable place began with her. We should all strive to be more like Emilia Rius.

The LGBTQIA+ community is a racially diverse group, and we can’t talk about achieving equality without discussing intersectionality. Within the healthcare landscape, we know that disparities exist for Black, Indigenous, People of Color (BIPOC) as well as LGBTQIA+ individuals. My upcoming AAPM presentation will highlight how being at the intersection of these two marginalized identities can shape your experience. The more we explore and understand these experiences, the better we will be at serving this patient population and delivering equitable health care.

Toni Marie Roth is a board-certified therapeutic medical physicist in the Department of Radiation Oncology at Washington University School of Medicine in St. Louis. She has an interest in brachytherapy and stereotactic radiosurgery/radiotherapy and is passionate about teaching and mentoring the next generation. Mx. Roth is an advocate for intersectionality within the healthcare sphere.

CategoryBlogs, News
TagsBlog
Help spread the word
Copy Link
https://www.theabr.org/blogs/lgbtqia-community-concerned-about-all-marginalized-populations
© 2023 American Board of Radiology    |    Privacy & Legal    |    Americans with Disabilities Act (ADA) Site Map
The American Board of Radiology does not and shall not discriminate based on race, color, religion (creed), gender, gender expression, age, national origin (ancestry), disability, marital status, sexual orientation, or military status in any of its activities or operations. These activities include but are not limited to hiring and firing of staff, selection of volunteers, conducting committee meetings, and administering exams. We are committed to an environment free from discrimination, sexual harassment, and other unlawful forms of harassment. To report any actions of discrimination, sexual harassment, or other unlawful harassment, please contact Karyn Howard, Managing Director, at 520-790-2900 extension 2171 or you can call our confidential hotline at 844-280-0005.